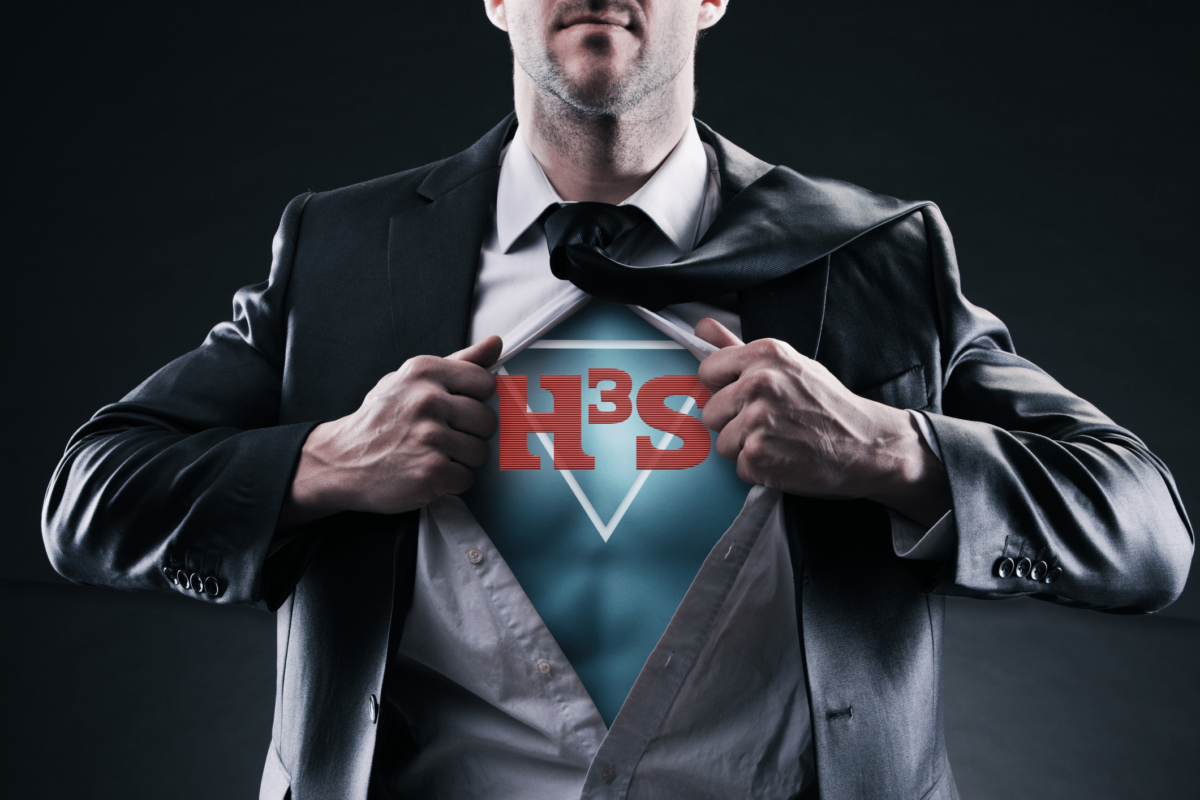 Most leaders I’ve met want to build a high-performance organization. Instinctively, they know that this requires great people. But few of them have ever taken the time to define exactly what they are looking for when it comes to the ideal candidate.

Good leaders begin the recruiting process with a written job description. This generally includes the required educational experience and technical skills. But great leaders do more than this. They take a step back and look at the baseline qualities of the candidate.

Warm bodies are obviously not enough. Better-than-average won’t get you there either. Even “really good people” are insufficient. You need higher standards if you are going to achieve your mission.

As I have thought about this, I have reduced these high standards to a sort of formula: H3S.

For simplicity sake, I’m going to use the masculine pronoun below, but it should be understood that the ideal candidate may, of course, be either a man or a woman. Gender is irrelevant.

Humble people have a good sense of himself. They don't think more highly of themselves than they should (pride), nor lower than they ought (poor self-esteem). They are sober-minded, having a realistic grip on their strengths and weaknesses.

They do not exhibit self-ambition. They might be ambitious for the cause, company, or team, but they're not ambitious for themselves. They aren't overly concerned about their title, status, or position relative to others.

Humble people assume the posture of a learner and don't pretend to know more than they do. It never crosses their mind that they may be the smartest person in the room.

They respect other points of view and asks questions to make sure that they understand an idea before criticizing it. They make other people feel smart and competent.

They are others-centered, no matter who the other person is. They acknowledge “the little people,” those that are easily overlooked by everyone else. They are valued and treated as peers.

Whenever I hire an executive, I always like to take him or her to dinner. I am always interested to see how they treat the host, the waiters, and even the busboys. Will they be curt? Demanding or brusque? Does they treat the people who serve them with dignity? Do they even notice them? Are they appreciative?

I am always leery of people who suck-up to those they want something from and disrespect everyone else. There’s no explaining it away. This is a character flaw. I have no patience for it, and I don’t want someone like that working in my organization.

Humble people are open to correction and not defensive. They are quick to admit mistakes and apologize. They know how to say, “I am sorry. What I did was wrong. Will you please forgive me?” Everyone makes mistakes. The truly humble try to make it right. Usually, they have had plenty of practice.

They are conscious of the contributions others have made to their life, career, and achievement. They are quick to give credit and express sincere gratitude. Conversely, when others compliment them, they offer a simple thank-you, without making a big fuss about it.

Finally, they do not consider certain jobs to be beneath them. They see what needs to be done, pitch in, and are just happy to be part of the team.

As Dr. Stephen R. Covey points out in The 7 Habits of Highly Successful People:

Honesty is telling the truth—in other words, conforming our words to reality. Integrity is conforming reality to our words—in other words, keeping promises and fulfilling expectations. This requires an integrated character, a oneness, primarily with self but also with life. (195–196)

When I use the term honesty, I am referring to both honesty and integrity.

At the most basic level, honest people not lie, exaggerate, or misrepresent the facts. Spin control is a foreign concept. So is bragging. If anything, they are given to understatement, especially about their own accomplishments.

They do not withhold negative information but give you the good, the bad, and the ugly. They have the courage to face reality head on and make their words conform to it. They would never ask someone else to lie on their behalf or cover for them.

They are also honest in giving others feedback. They are able to be direct without being hurtful. They don't say anything about those who are absent that they wouldn’t say if they were present. They avoid drama.

Finally, honest people keep their commitments, even when it is difficult, expensive, or inconvenient. If they said they'd do it, they do. You can take it to the bank.

Early in my career, I was able to land the job as a marketing director at one of the larger publishing houses. The only problem was that I didn’t have any experience. None!

So my new boss put me on an informal 90-day probationary period. He said, “Look, I think you will do fine, but let’s agree to a 90-day trial run. If everything goes as planned, I will give you a raise equal to 10 percent of your annual salary. If not, we’ll shake hands and part company as friends.” I enthusiastically agreed, rolled up my sleeves, and got to work.

Knowing that this was an enormous opportunity, I read everything I could on marketing. I worked hard. I got to the office early and left late. I was determined to prove to my boss that he had made the right decision.

At the end of the 90-day period, I was actually looking forward to my review. I knew I had exceeded his expectations. I was confident I would get the raise.

My boss called me into his office. After the usual pleasantries, he said, “Mike, you have done an outstanding job. You have exceeded my expectations in every way. I am very proud of you.”

“But I have one problem,” he continued. “Last week, our parent company instituted a salary and wage freeze. They have refused to consider any exceptions.”

My heart sank. Though I tried to appear professional, I’m sure that my disappointment was written all over my face.

Then he handed me an envelope and said the most amazing thing. “In that envelope is a check for the amount I promised you. It’s not from the company, but from me personally. I have discussed this with my wife, and we are both in agreement. You don’t have a choice about whether or not to accept it. So don’t even think about refusing. I made a commitment to you. You lived up to your end of the bargain—and then some—and I want to live up to mine.”

As a young businessman, that act made an enormous impression on me. Not only did it bond me to my boss—still one of my best friends—for life, it has provided concrete guidance in every tough decision I have ever made.

A hungry person is someone with an appetite. Metaphorically speaking, their last meal is already a fading memory. They want to eat, and they want to eat now. All they can think about is food!

In other words, hungry people don’t dwell on past accomplishments. They are never satisfied. They're always reaching for more—setting higher goals. They are driven to exceed whatever expectations have been imposed upon them. This is just a part of their make-up.

They are intellectually curious. They read constantly—news sources, magazines, and books. Lots of books. They love learning new things and sharing that learning with others.

Hungry people don't get stuck in a rut. They're open to new ideas and new ways of solving old problems. That means they're always looking for the best solution and embrace change if it will take them—or the company—to a new level.

They come to meetings prepared, having completed their homework. In the meeting, they listen actively, asking lots of questions and taking notes. Afterward, they follow up. They complete assignments on time without someone having to prod them. They are relentless when it comes to execution.

In short, hungry people full out, holding nothing back. More than anything, they want to win and are willing to pay the price to do so.

Smart people usually score high on traditional IQ tests. But not always. You have to be careful. Some people are book-smart but street-stupid. I’d like to have both. But if forced to choose, I’ll take the street-smart candidate.

Smart people are a quick study. They can connect the dots without a lot of help. They have a natural ability to think laterally, that is, across disciplines. They can apply learning from one field or category to another.

They're comfortable using metaphors and analogies. They know how to make complex subjects simple without confusing themselves and everyone else in the process.

I was a philosophy major. Some of the books I had to read were really difficult. I remember reading, re-reading, and then re-re-reading some particularly tough passages. Then it dawned on me. If this guy is so smart, why can’t he explain this in a way that is easy to follow? I concluded it was a case of  “the emperor having no clothes.”

In my experience, confusion often masquerades as complexity. Listening to an explanation, you might be tempted to think that you’re just not smart enough to understand the issue. In reality, the presenter may not understand it well enough to make it simple. I want people working for me who are smart enough to work through the complexity in order to arrive at a simple explanation.

Smart people also ask thoughtful questions. They see connections between topics that others miss. They are aware of nuances. And they have diverse interests, which come in handy when trying to understand new information.

They are also able to focus mentally, for long periods of time if necessary. They don’t give up quickly. They keep pressing until they gain clarity or insight. They are a creative problem solvers.

Finally, smart people have cognitive intelligence. That’s mostly what I have covered here. But that alone is not sufficient. In my opinion, a successful candidate also needs emotional, relational, and even spiritual intelligence to succeed.

In my company, I want to hire people who are H3S: humble, honest, hungry, and smart. If I can do that consistently, I will build a great and enduring organization.

By the way, I have also developed a list of 25 questions to ask candidates. These questions help you discern whether or not he or she is the ideal candidate. You will find them, if you know what to look for.

How to Sync Up Your Team for Success