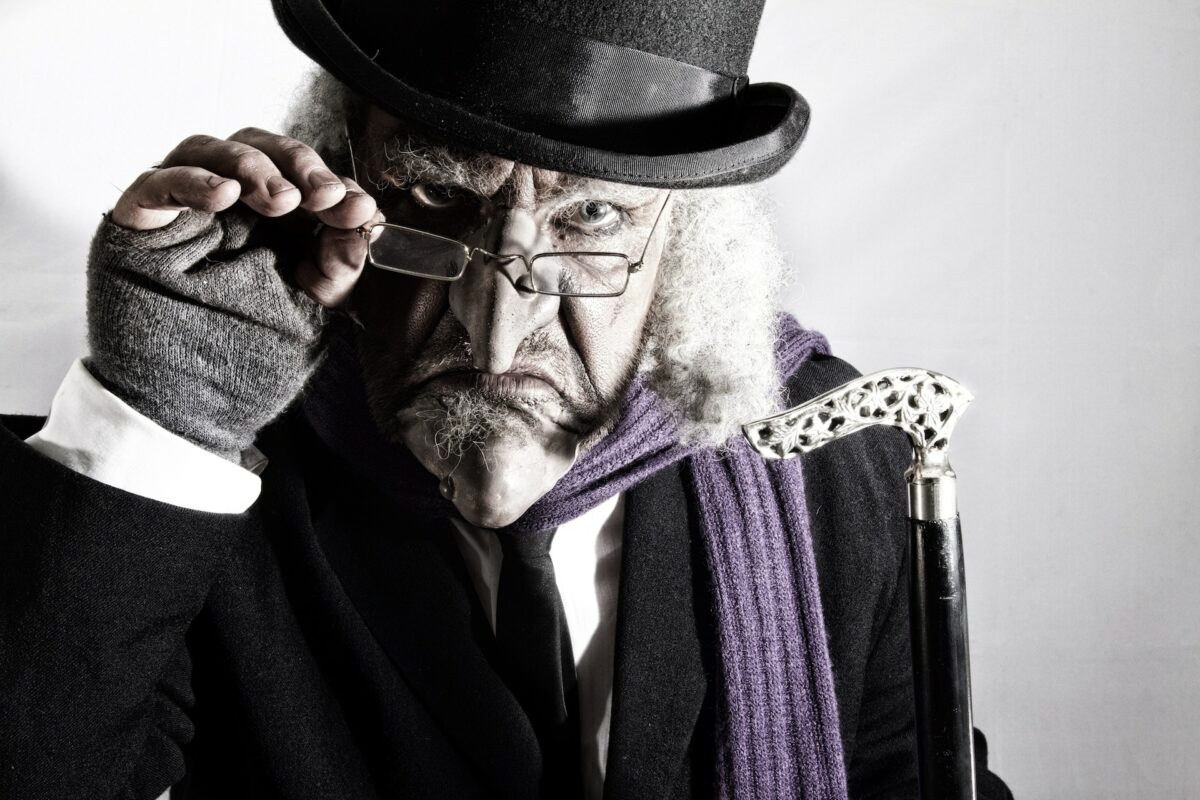 Pettiness is a word that is on the way out. Google Books shows its usage down sharply since the middle of the 1960s, and many people have a hard time getting a handle on it today. That’s a shame because it’s an important term. It may be impossible to understand much of our recent public discourse—or an enduring holiday classic—without it.

Take Charles Dickens’s A Christmas Carol. What was Ebenezer Scrooge’s main character flaw, or besetting sin? Was he greedy, miserly, envious, spiteful, misanthropic? Above all, he was petty. It’s the morally-loaded counterpart to small. You can hear its echo in petite, which is closer to the original French loan word.

In the opening scene of the story, the sole living proprietor of Scrooge and Marley doesn’t allow more than one lump of coal to warm his poor, shivering clerk’s work area. He also frequently insults and threatens to fire his employee, and holds his near-poverty over his head.

Scrooge answers his visiting nephew’s “Merry Christmas! God save you!” with what in 1843 must have been a shocking “Bah! Humbug!” (This would be “Bah! BS!” or worse in modern American English. The word means nonsense, but it's a bit rougher.) He mocks love as a reason for his relation’s marriage. He refuses to come see his own kin for dinner. Having established—and then some!—that he despises Christmas, the man then refuses to return his nephew’s “Happy New Year.”

The big problem with being small

In all of these things and so many more, Ebenezer Scrooge was petty. I was going to write “unbelievably petty,” but if you strip away some of Dickens’s cartoonish exaggeration (“Even the blind men’s dogs” avoided him), it's not so unbelievable. Such pettiness is on full display today. Just scroll down your social media feed, and be sure to include your own posts and comments and Twitterpations in that inventory.

One of Dickens’s real insights into Scrooge, and by extension us, is that any benefit we derive from pettiness is terribly short lived. By being so small toward others, we diminish ourselves in numerous ways. It crimps our personalities and our vision. Scrooge is proud and miserable and terribly shortsighted. He has his money and his pride and a razor tongue—and that’s about it. With the exception of his nephew, most of the living have given up on seeing him as anything other than something like a ravenous loan shark.

One of Dickens’s real insights into Scrooge, and by extension us, is that any benefit we derive from pettiness is terribly short lived.Jeremy Lott

And he’s too petty to see that he ought to be getting more out of life. “There are many things from which I might have derived good, by which I have not profited,” says the nephew, sensibly. Scrooge retorts by again threatening to fire his clerk and calling his relative a lousy politician.

Even when he is visited by the ghost of his dead partner, chained down and damned by his own sins, Scrooge can’t see his own cramped, narrow error. It takes the frightening visions of the three Christmas ghosts to finally bring him back to a larger vision of his fellow man, and himself in the process.

Scrooge’s story may be extreme, but his experience is not alien to us. That’s one reason why Dickens’s story was such a hit. As this time of year, perhaps encouraged along by one of the many adaptations of A Christmas Carol, many of us take some to reflect on how we have behaved. We make a sort of moral inventory: What did we do right? What did we miss? What can we do better?

Let me suggest pettiness ought to be on the list of vices we consign to the Ghost of Christmas Past. Do you say “Yes!” or “Bah! Humbug!” to that?